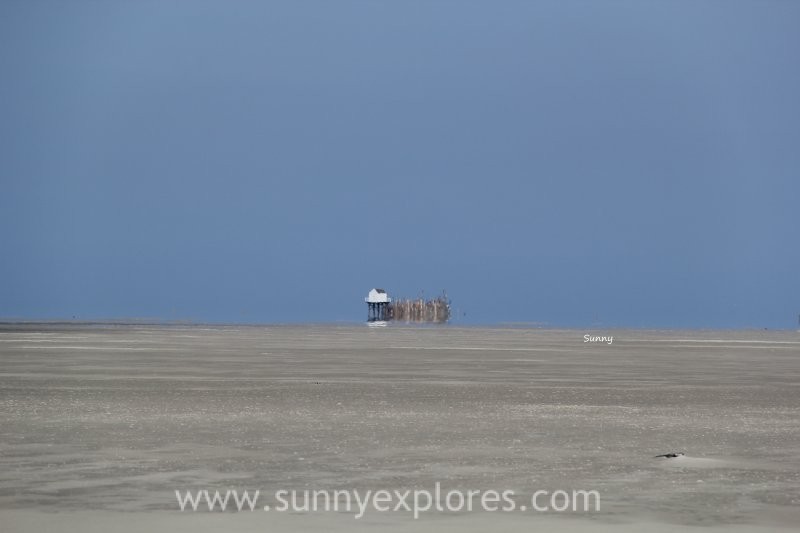 The ‘Dutch Sahara’ is how the islanders call the Vliehors, the extreme point of Vlieland with its idyllic ‘drowning cottage’. Vlieland is one of the six islands of the Dutch coast. I have been on the Vliehors before, years ago.

Now my dog Vlinder and I sit in a bumpy car, which is called the ‘Vliehors Express’. Again I am on my way to the tip of the island, where you can almost touch the lighthouse of Texel, one of the other Dutch islands.
Not much has changed since my last trip about 10 years ago. Wout, Vlielands musician, still plays on his accordion on board of the Vliehors Express. The endless beach is still filled with row of resting gulls. And on the Vliehors, a military training area, the red flag is still up. Also today the area is not accessible. Our driver doesn’t seem to mind: ‘I always ask kindly not to shoot us. And usually they don’t.’ We pass three abandoned tanks, practice goals for the Air Force. A while ago the news reported that a Danish pilot accidentally shelled the air traffic control tower instead of the tanks. Both controllers were unharmed. 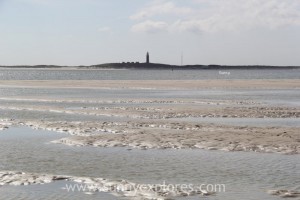 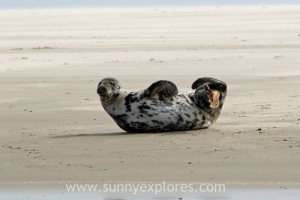 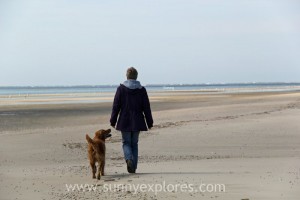 We reach the point where the lighthouse of Texel seem very close, only 1.5 kilometres, separated only by a narrow strip of water, het Eierlandse Gat. William, the seal, is still there after all those years. He hobbles to sea for a quick swim until the invaders of his territory are gone. My dog Vlinder runs back and forth with the cocker spaniel, owned by the driver of the Vliehors Express. For her, this is beach equal to other beaches she inspected the recent days. Why the bumpy ride was needed, she does not understand. I on the other hand, enjoy this endless sand. Nothing but sea and sand as far as I can see: the Dutch Sahara. 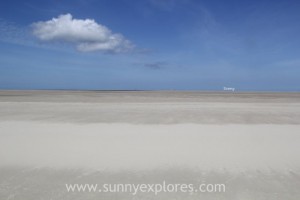 I look at the blue sky and the bright blue sea. This week on the island I have seen the sea in all colors; mud brown, dark green and in many shades of gray. Today the sea was very dark blue in the morning and is bright blue now. The sun glitters on the water which radiates and sparkles as if pearls are hidden. Vlinder and I walk to the silence. She trudges loyal behind me, a sign that she is bored. Our other dogs have remained in the cottage and the cocker spaniel is a bit shy and Vlinder could not dare him into mischief. 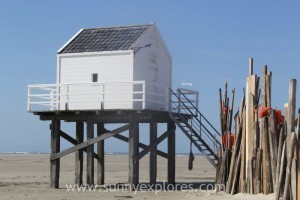 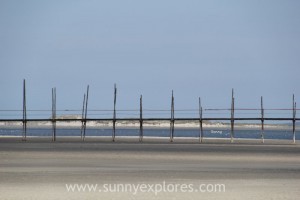 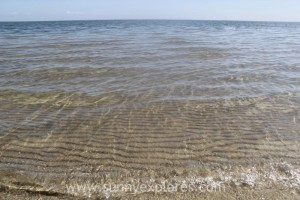 The second stop is at the little ‘Drowning House’. This cottage is a few hunderd years old. Dozens of drowning were saved. Now it’s a wedding venue. And the smallest museum in the Netherlands, a Juttersmuseum. All kinds of things found on the beach are exhibited here. The driver gives us a tour in the museum, though only about six people fitt in the cottage. I don’t go in and wander along the coast, where Vlinder and I find a dead seal. We also find a clog and a riled fishing glove for the museum collection. Again I take some pictures of the sea, thinking how immensely I love these shades of blue. 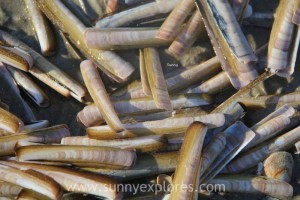