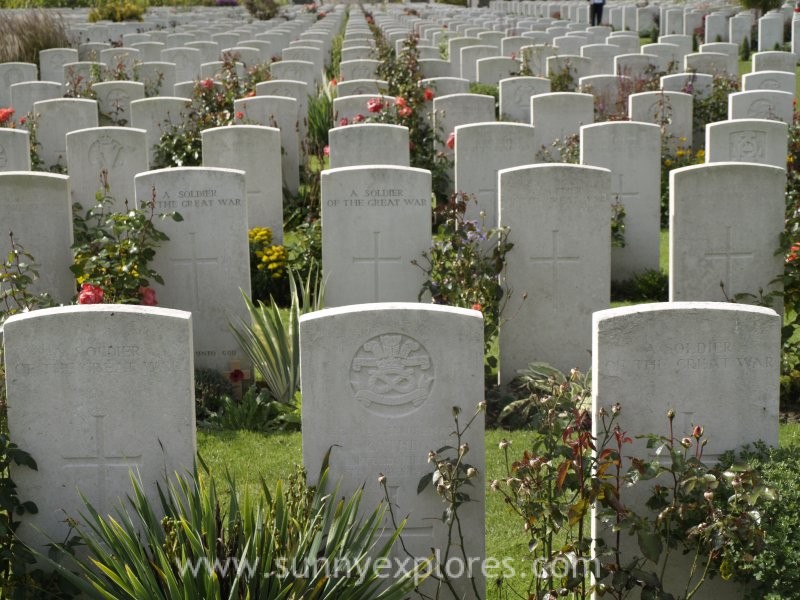 During the First World War (1914-1918) the Belgian region of Flanders formed the front area of one of the most devastating conflicts in history. While the Great War raged through out Europe, a war that racked up nearly 38 million casualties, included more than 8,5 million deaths, Flanders was the sad backdrop to a trench war. Many monuments, cemeteries and museums recall the fierce battles that took place here, but also the landscape itself tells the sad story of the Great War. 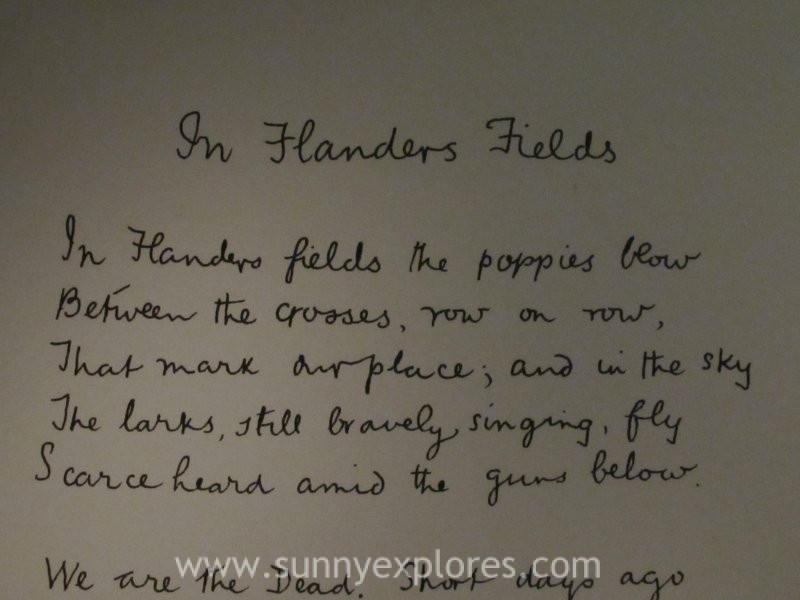 Start your trip in Ypres, in the In Flanders Fields Museum. History comes alive in a penetrating way in this modern and interactive museum. The name comes from the famous poem by John McCrae. The soil of the Western Front was torn up by miles of trenches and pocked by bombs and artillery fire. The Flanders Fields carried the blood and bodies of millions of men. After the Second Battle of Ypres, the Canadian doctor John McCrae noticed red poppies growing near one of Flanders Fields’ mass cemeteries. He wrote a poem, ‘In Flanders Fields’.

In Flanders fields the poppies blow
Between the crosses, row on row

Today, people throughout the Commonwealth wear poppies on Remembrance Sunday, a day that commemorates the dead of both World War I and World War II.

From October 1914 to October 1918 the battlefield was located a few miles from the center of Ypres. The trenches lay from north to south in an arc around the city. The Ypres Salient was an important frontline, where five bloody battles were fought. Walking along the Ypres Salient you will discover the past. 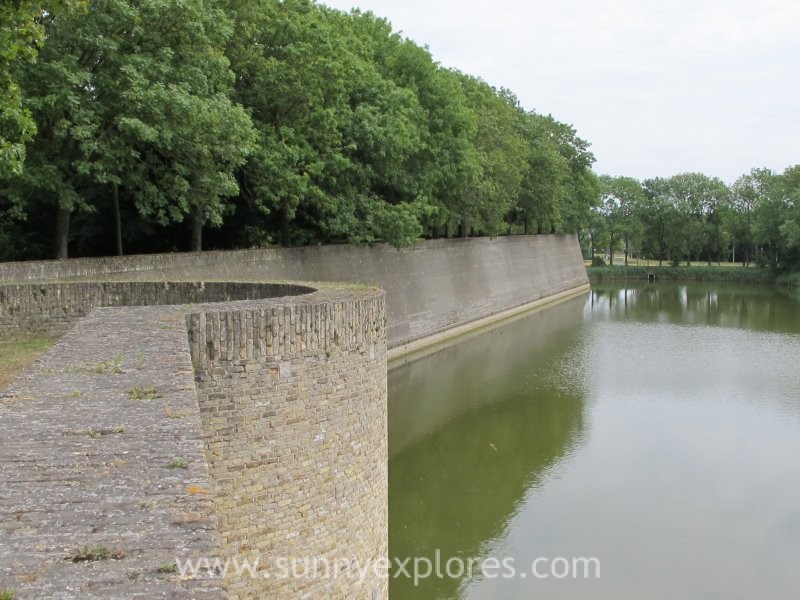 Also interesting to visit are the fortifications in Ypres. Initially, some 10 centuries ago, the fortifications were meant to protect the city. Around 1680, the famous French engineer Vauban converted the fortress into a huge complex with pre-fortifications and bastions. A beautiful walking path runs along the ramparts, which gives you the feeling to be in nature. 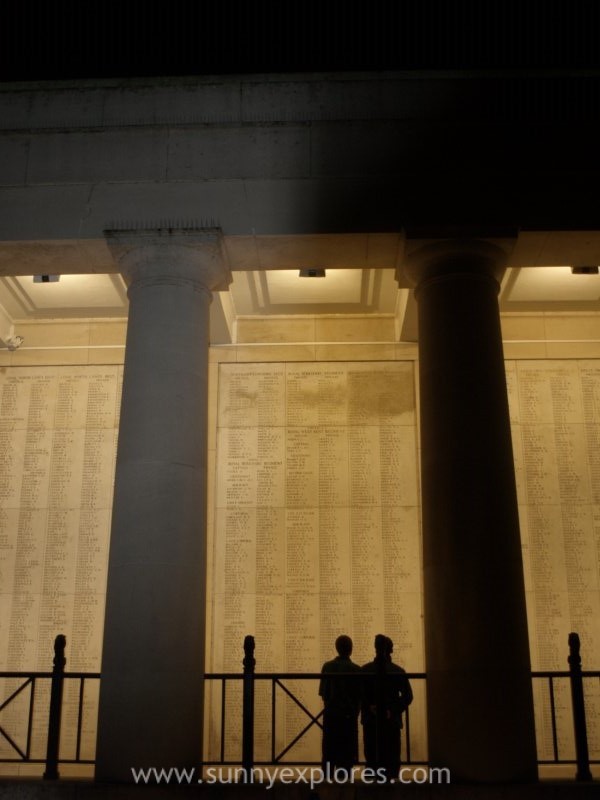 And when you are in Ypres, don’t forget to attend the Last Post. Every day at 20:00 the Last Post is played under the Menenpoort as a tribute to those who died in the First World War. In the Menenpoort you can read the names of 54.896 missing soldiers, non-commissioned officers and officers of the British Commonwealth. 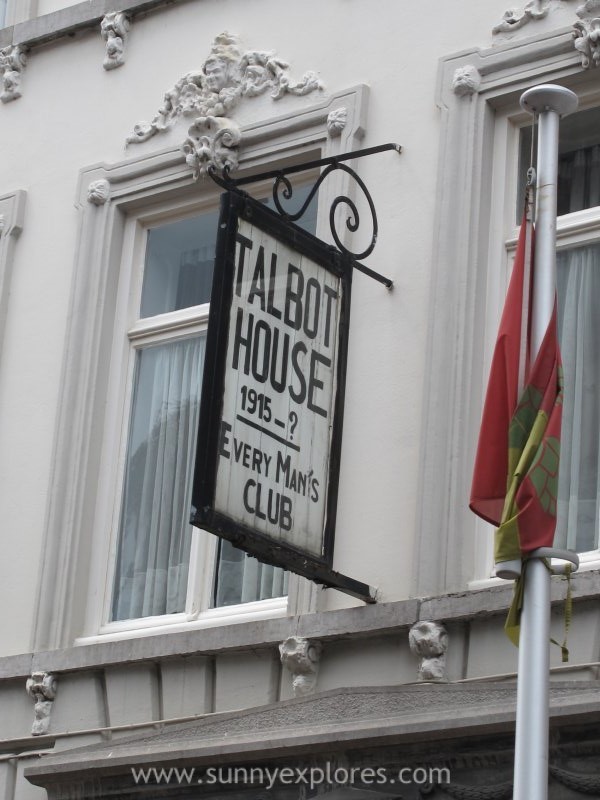 During the First World War Poperingen was part of the small piece of unoccupied Belgium. Away from the warfare of the Ypres frontier, the city grew into the nerve center of the British sector. In the middle of that busy city, the chaplains Neville Talbot and Philip ‘Tubby’ Clayton opened a Clubhouse. Without distinction, soldiers could enjoy a rare moment of rest and relaxation. Now it is a museum, and also a Bed and Breakfast. Stay here to immerse yourself fully into the historical experience. 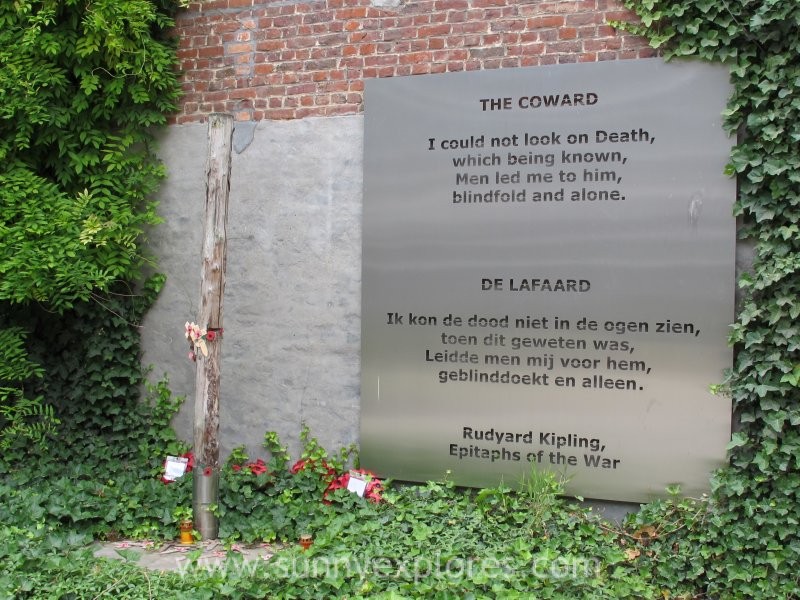 For me this was the most impressive memory place. In the courtyard of the town hall, an execution pole reminds of the atrocities that took place here during the First World War. From 1916, the cells were set up as ‘death cells’, where the convicted soldiers spent their last night. At dawn these soldiers were killed by execution, the infamous term ‘shot at dawn’. It is painful to realize that the exhausted soldiers, mostly still young boys, were convicted of offenses like falling asleep during service.

The Pool of Peace, Wijtschate 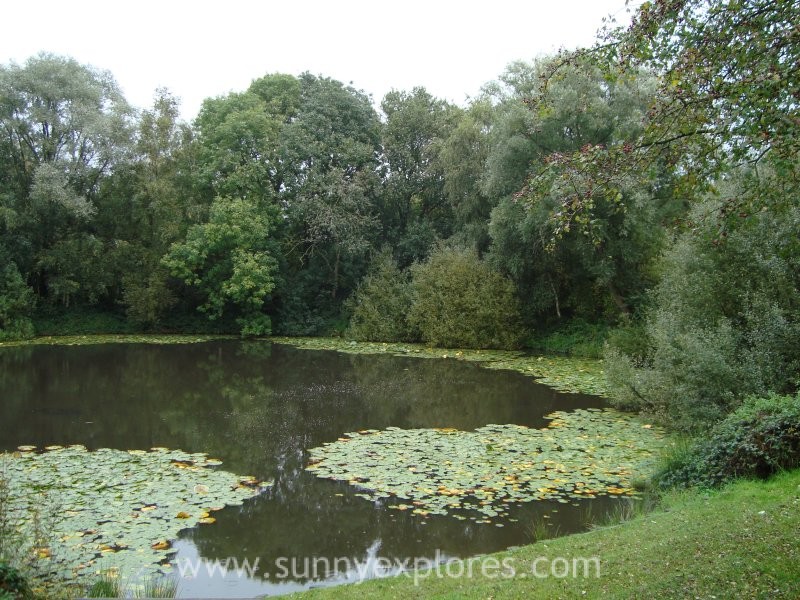 There are also some small, but impressive places that you really should see. The Spanbroekmolenkrater, also known as Pool of Peace, is one of them. This is the largest and most impressive mine crater in Flanders. The crater is a reminder of the Mine Battle. On June 7, 1917, British troops unleashed 19 underground mines from Hill 60 to Ploegsteert. The explosions caused huge craters in the landscape. The Pool of Peace is now a 12-meter deep pond with 129 meter diameter. A peaceful piece of nature, that reminds of a devastating conflict. 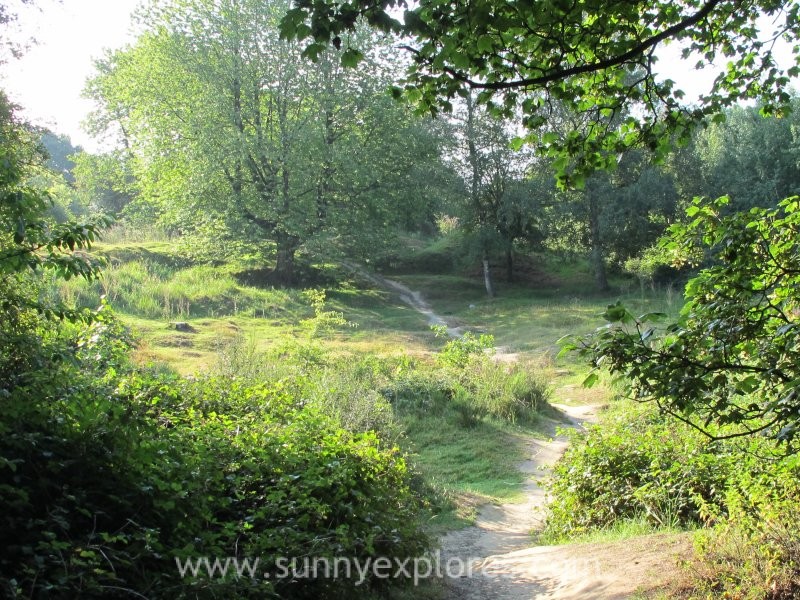 Hill 60 can also be visited. This artificial hill, built in 1850, was about 60 meters high, hence the name Hill 60. From 1914 to 1918 there was fierce fighting between the Germans and the Allied Forces around this Hill. Both installed tunnels under the hill and placed mines. The explosion of the depth mines on June 7, 1917, caused the current landscape of Hill 60. Many soldiers are still buried under this hill. 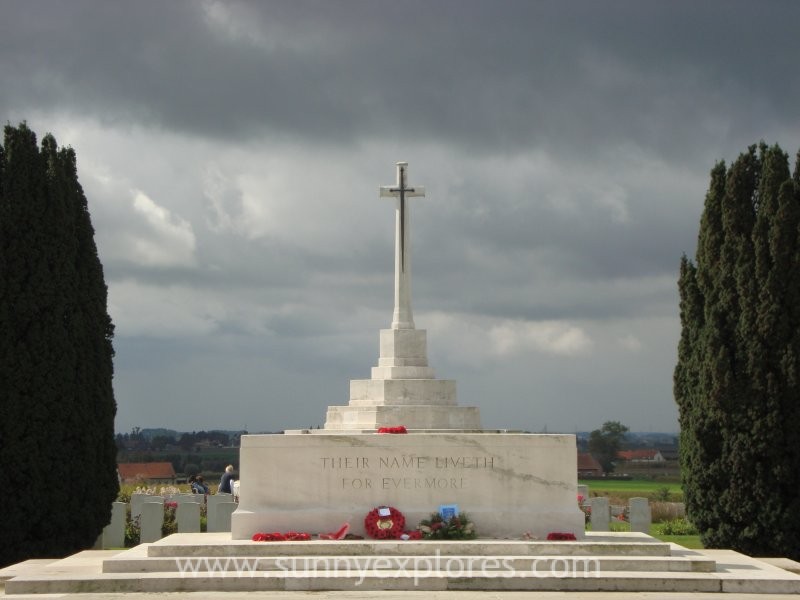 Belgium has an enormous amount of war cemeteries. Tyne Cot Cemetery is the largest Commonwealth cemetery on the mainland and also the most important witness of the bloody Battle of Passchendale. About 12,000 soldiers are buried here. At the Tyne Cot Memorial you can read another 35,000 names of soldiers without a known grave. These are the names that are missing in the Meningpoort. From the visitor center you have a unique view over the old battlefields and you feel the gripping story of Tyne Cot Cemetery and the dead of Passendale. 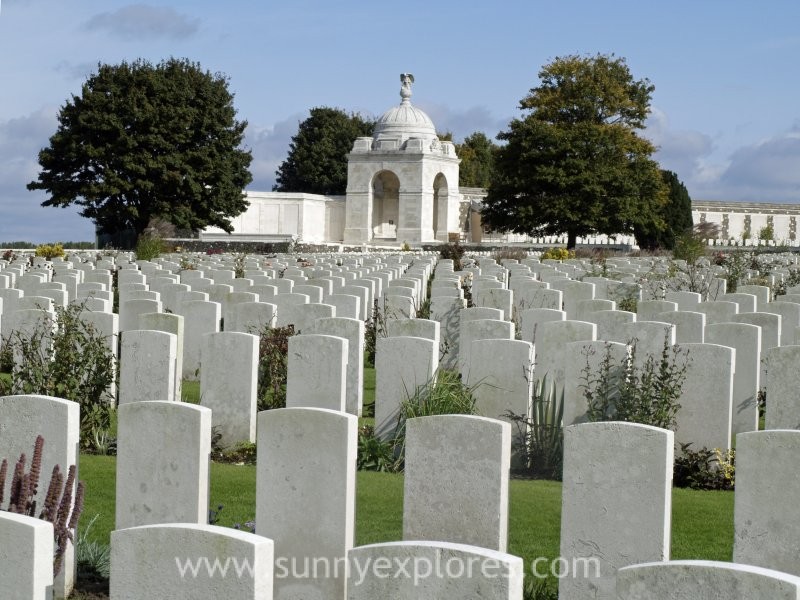 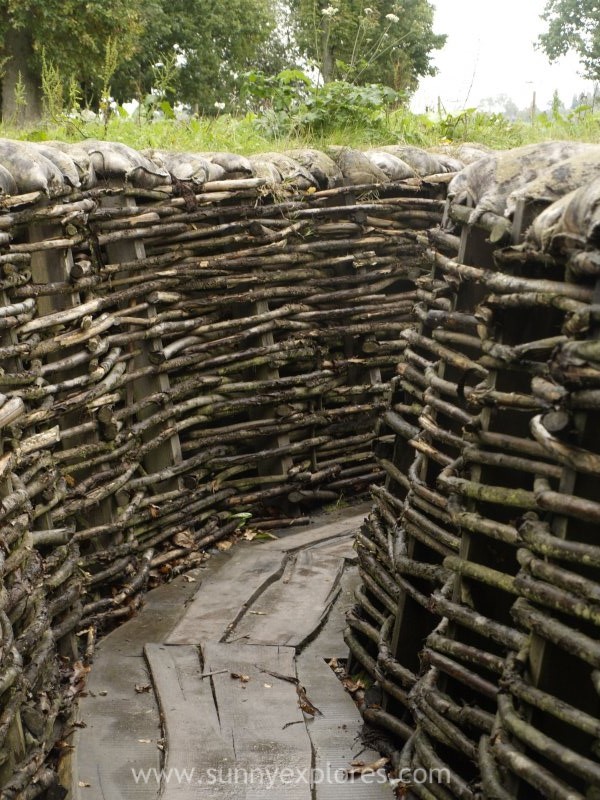 In the Croonaertbos in Wijtschate you can visit a reconstruction of a German trench system. The German troops conquered this place on the French in 1914 and named the site ‘Bayernwald’. Here you will also find two ‘listening shafts’. The German soldiers feared British deep mines and were able to eavesdrop on the enemy’s activities thanks to these passages. Bayernwald has been reconstructed on the basis of archaeological research and shows around 10 % of the original construction. 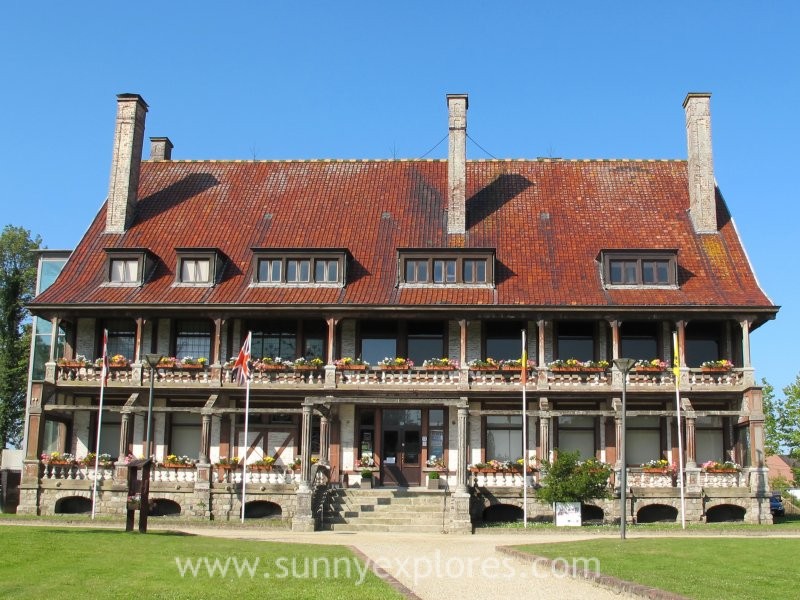 Besides this list, Flanders has many more First World War memorial places, but these mentioned above made the most impression on me.