Tulúm ruins in Mexico: the sacred walled city of the Maya 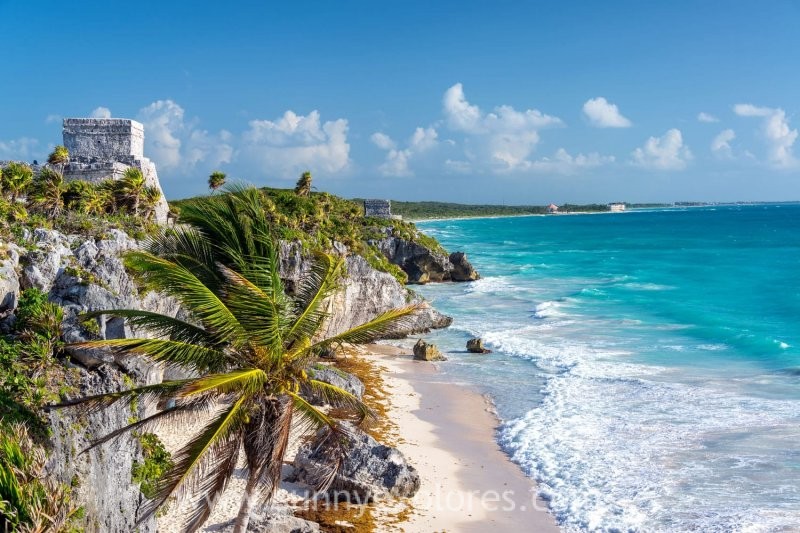 The black ruins of Tulúm lie dramatically high on a cliff above the turquoise sea. Once an impressive Mayan city, now only ruins remain, but even what is left of Tulúm sparks the imagination. 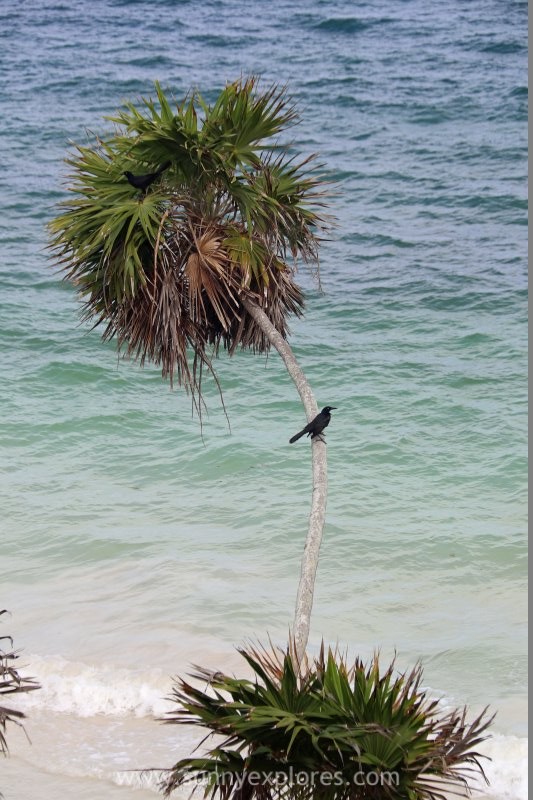 Tulúm was formerly known as ‘Zama’, which means the City of Dawn, or the ‘place where the morning is born’. Tulúm is also the Yucatec Mayan word for fence or wall. From the numerous depictions in murals and other works around the site, Tulúm appears to have been an important place for the worship of the Diving or Descending God. During the classic period of the Maya, Tulúm was connected to other major cities at Coba and Chichen Itza by some kind of highways. These highways were made of stone, which indicates there was a lot of traffic between the cities. Chichen Itza was the city with a dense population, while Coba was a trading center. Tulúm was the spiritual center of the region, but it was also a seaport, trading mainly in turquoise and jade. The highest building, El Castillo, was also a lighthouse to make navigation easier for the ancient mariners. When two torches were aligned, it showed the way through the surrounding reef. Artifacts uncovered at the site indicate that Tulúm traded with other Mayan sites in Guatemala and modern day Honduras. 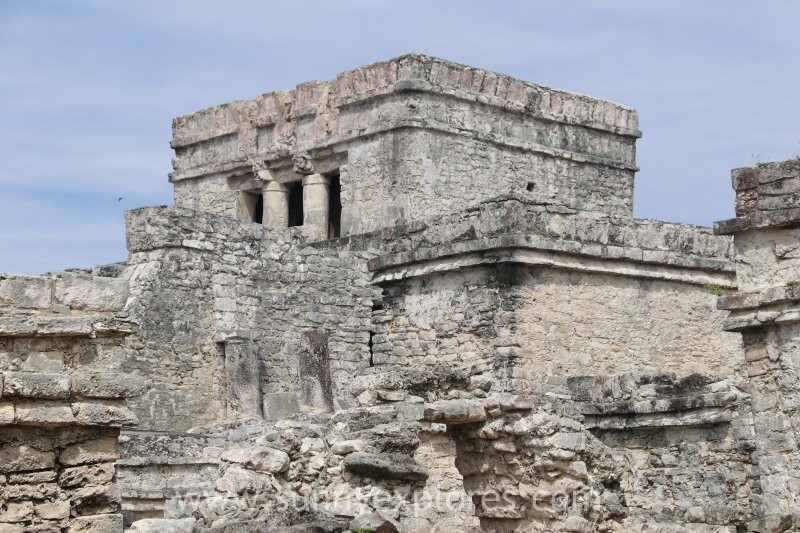 As well as being the only Mayan city built on the coast, Tulúm was one of the few protected by a wall. Made of limestone, the 784-meter wall encloses the site on three sides. The wall is seven meters thick, and varies between three and five meters in height. It’s still not clear why the Maya required a wall around the city on three sides. The forth side, the east, is a cliff with natural protection from the sea. Some archaeologists argue the inhabitants of Tulúm may have been in serious conflict with other Mayan city-states to the south in Belize. Others suggest the city was located on it’s beach front perch to watch the trade routes that traveled up from the south and around the northern tip of the Yucatan on their way to gulf trading ports near Mayapan. Or maybe Tulúm was a sacred spiritual center, a place where the rising sun was worshiped and where sacrifices were made. Other theories suggest the walls protected the Maya popularion from invaders, while another suggests only priests and nobility were housed within the walls, while peasants were kept on the outside. 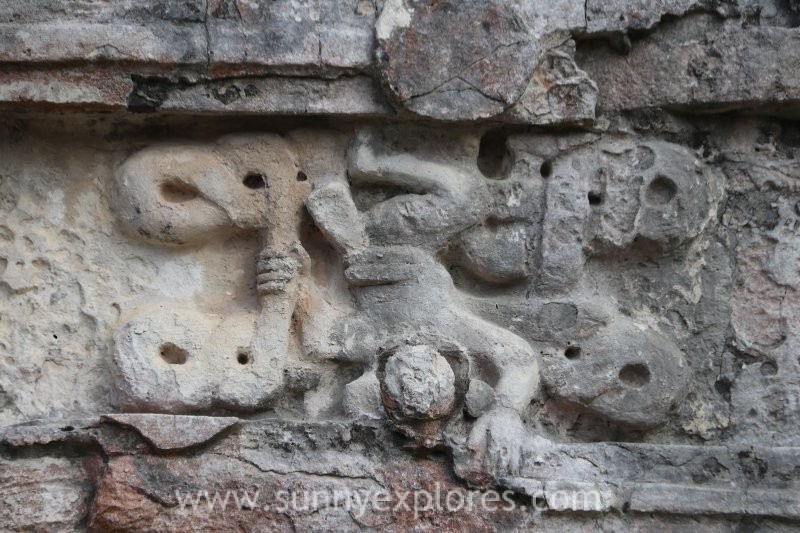 The structures that remain today were built in the Post-Classic Era, between about 1200 and 1450. The city remained occupied through the early years of the Spanish conquest of Yucatán, but was abandoned by the end of the 16th century. Tulúm was first mentioned by Spanish explorer Juan Diez, who was part of Juan de Grijalva’s expedition of 1518, not long after Columbus discovered the West Indies. There are about 60 well preserved buildings on the site of Tulúm. You enter the ruins through one of five doorways in the wall, which work like a time-machine. Go through the doorway in the wall and you step into ancient Mayan times. 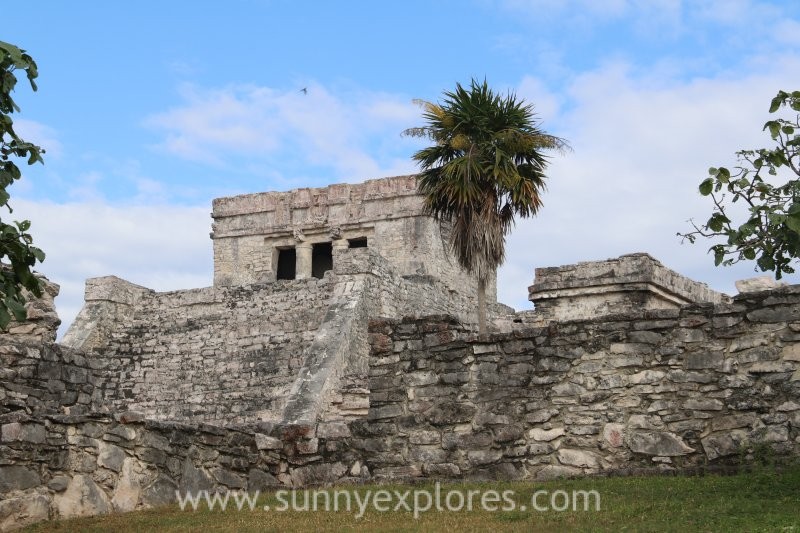 The building that catches the eye most is El Castillo, or the Castle, which is perched on the edge of a 12-meter limestone cliff, overlooking the Caribbean coast. The doorway to the temple has columns in the shape of rattlesnakes, with the tails supporting the roof and their heads adjoining the floor. It served as a lighthouse and watchtower to the sea. From here you can also watch the rising sun. 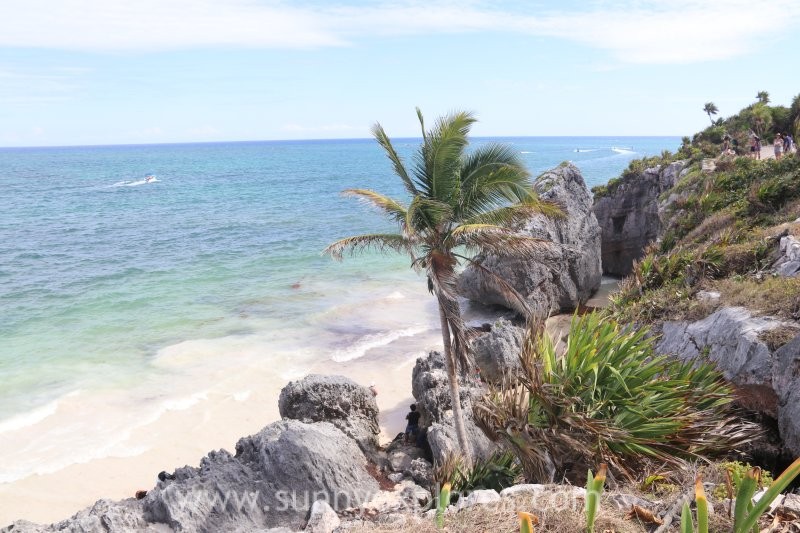 In front of the Castillo lies the Temple of the Frescoes, one of the better preserved buildings. The frescoes have typical Mayan motifs in the interior. Some of the original colors are fairly well preserved. Around the outside of the building you’ll find many statues, also with traces of the original paint. Here you can also see Quezalcoatl, the feathered serpent god that ruled the ancient Mayan world. The mural is painted in three sections. The first level represents the world of the dead, the middle is that of the living, and the final, the highest piece, is of the creator and rain gods. Interesting to note in the middle of the living section is a god astride a four-legged animal believed to be a horse. If in fact this is a horse, it would mean Mayans still occupied Tulúm in 1518 when they would have seen the animals for the first time with the arrival of the Spanish. Chiselled above the doorway of the temple is a figure of a diving god. 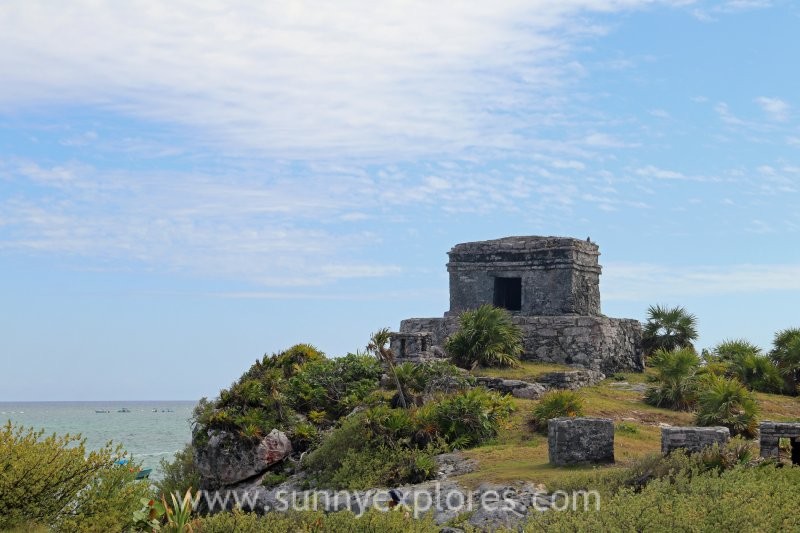 My favorite building is the Temple of the Wind. It’s for sure one of the most photographed buildings in Tulúm due to its location right next to the turquoise sea. This temple is part of the Kukulkán Group, located just north of El Castillo. This group is formed by a series of minor structures among which the Temple of the Wind stands out. Its name comes from the roundness of its base without corners, which has traditionally been associated with the God of the Wind Ehécatl, the equivalent wind deity of central Mexico, and here associated with the Mayan deity Kukulkán. The God of Wind was related to the four cardinal points, because the wind blows in all directions. Hence, its temples had a cylindrical shape, in order to offer less resistance to the wind. It seems that the temple also functioned as a hurricane warning system. A specially designed hole at the top of the temple creates a whistle when hurricane force winds are whipping up a storm. When the Mayans heard this whistling, they knew they had to leave the city to seek protection inland. Proof of this occurred in 1995 when Hurricane Roxanne reached hurricane force winds and the temple whistled. This intriguing building could also have been an observatory, as there is a little gap and a symbol that line up with a constellation in the sky. 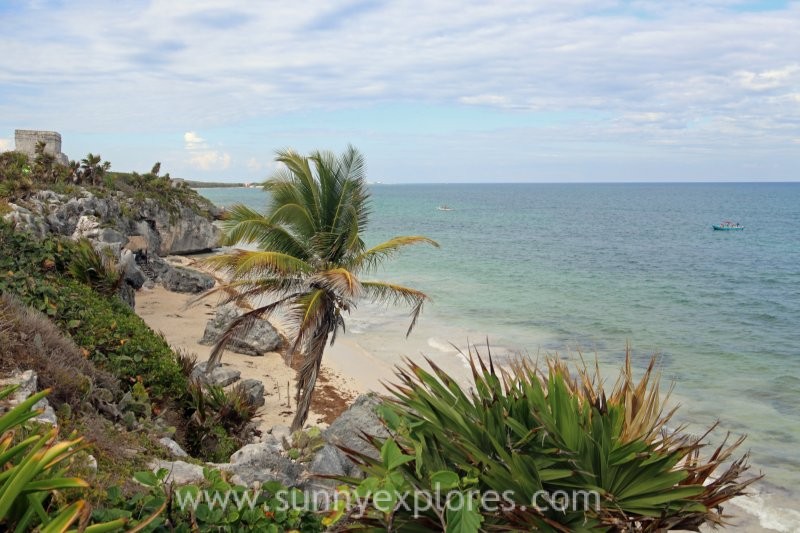 After wandering around and exploring this ancient Mayan site, it’s great to relax at the spectacular Secret Beach. The beach is not that secret though: most of the time it’s litterally packed. For me, the best part of this archeaological site is the viewpoint from which you can see the Temple of Winds. At this highest point you can see the pelicans fly past in formation and I took way too many photos of an osprey diving to catch fish.

Tulúm remains popular because of its elegant setting on sheer limestone cliffs above the turquoise splendour of the crashing Caribbean. When you read travelblogs about this site, they tell you to arrive early to avoid the crowds. This is bad advice. I lived in a cabana on the beach next to the ruins. I cycled past the site every day on my way to the divecenter and every morning early I saw big lines for the entrance. When I came back from diving I saw crowds coming out of the ruins. So I decided to visit the site late and yes, there were no crowds and even the Secret Beach was empty! 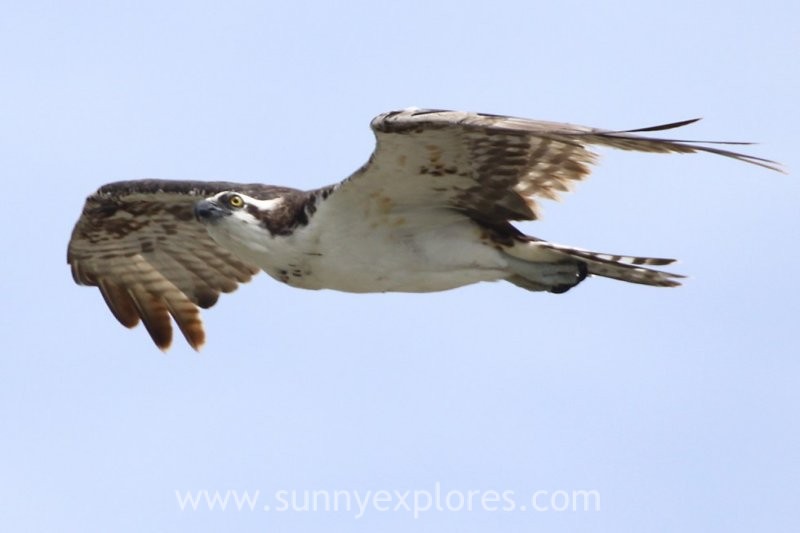 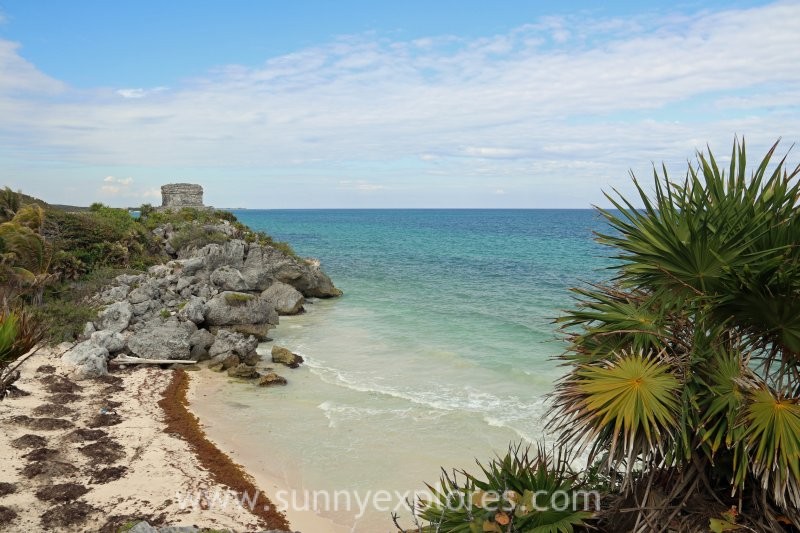 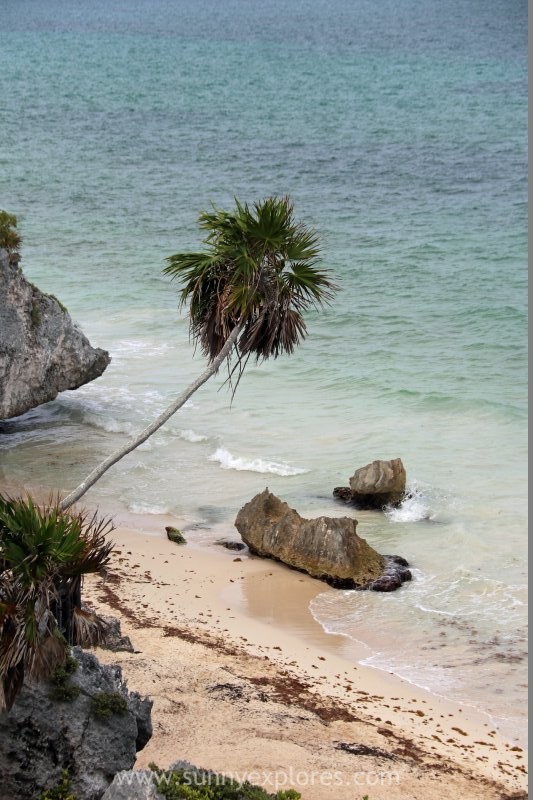 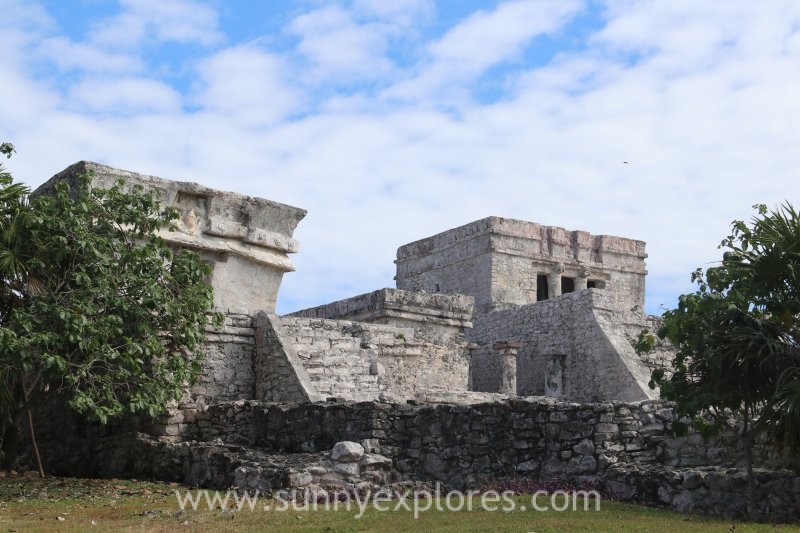 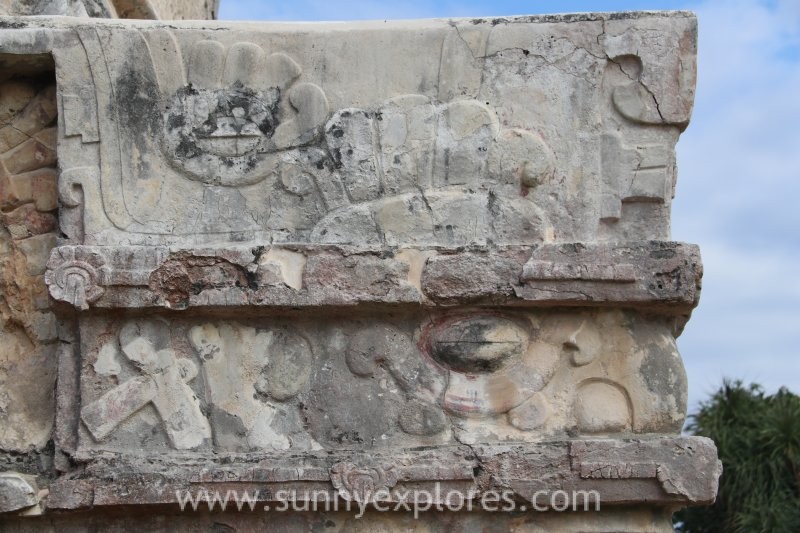 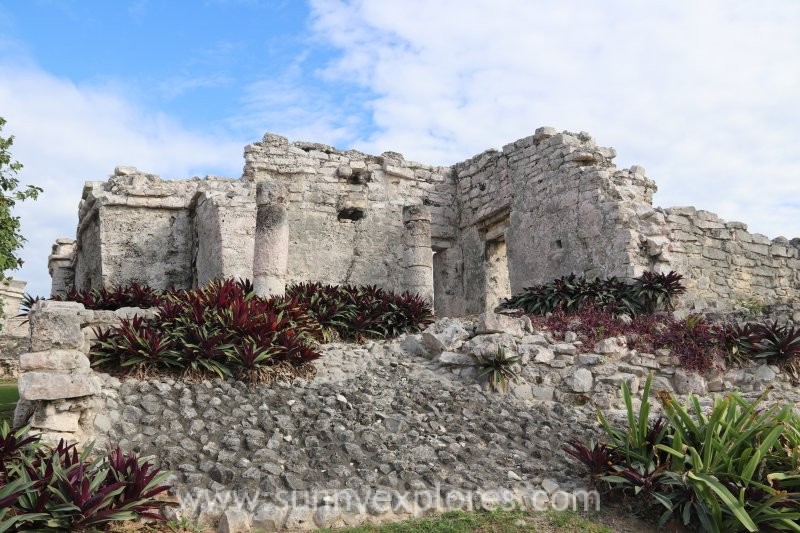