Under water adventures: diving with octopuses 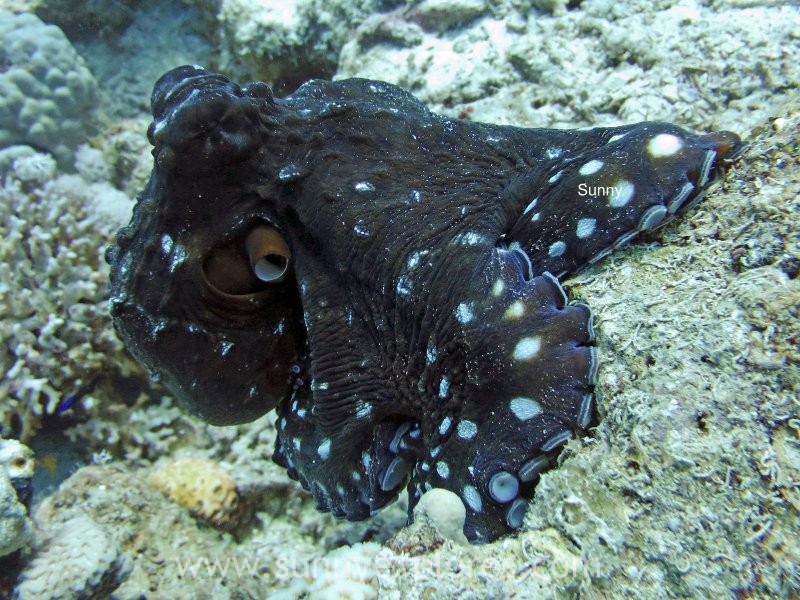 Scuba diving allows me to experience the marvels of the ocean’s depths. For me octopuses are one of the ocean’s most fascinating creatures. Ofcourse they are famous for having eight arms, but did you know the octopus has three hearts and sex is deadly? But it’s their behaviour that fascinates me most. 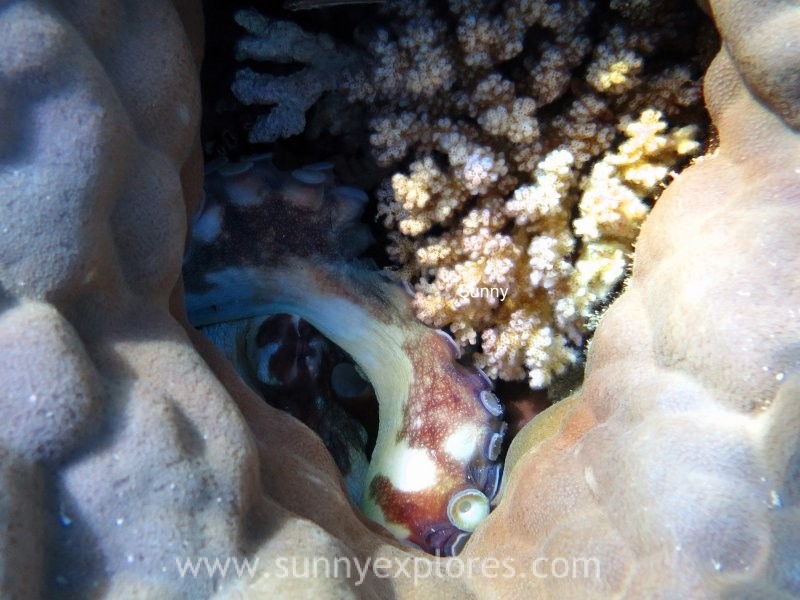 During one of my dives in Dahab in Egypt an octopus was hiding in a small crack. Till then I never had the chance tot take a good octopus picture, so my buddy and I tried to convince him to come out of his shelter by offering him gifts. We knew octopuses like to collect things and we searched for shells and other treasures that might interest our hiding octopus. He was very curious and every time we brought him a shell, an eye popped out of his hiding place. Still, the shells were not good enough. When my buddy gave him some seaweed in a flash one of his arms came out and took the gift. The octopus disappeared with his treasure in the crack. After a while he peaked out again to see if we had more gifts. When I ran out of air I had to give up my attempts to get a good octopus shot. But the interaction and his curiosity about our gifts made it one of my best dives. 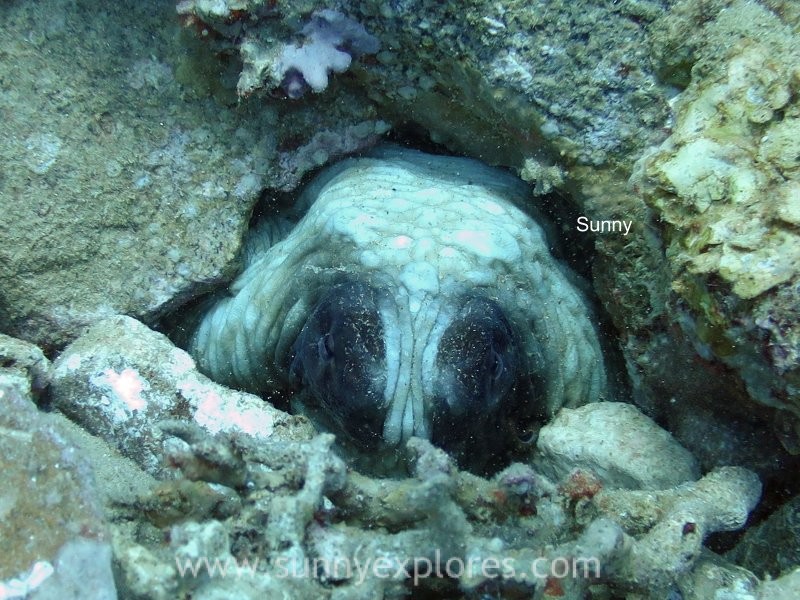 After that dive I started researching octopuses and their behaviour. There are so many interesting facts to learn about this animal. Octopuses have eight long arms that they use for locomotion. Each of these arms has over 200 suction cups that help him to grab onto his prey. The suckers are very sensitive and they give the octopus great amounts of information, even more than through sight. The octopus can multitask. He can use two of his arms to open a shell, while other arms focus on a different task. They learn how to perform tasks by watching other more experienced octopuses. But they also use trial and error to figure things out, which makes them very creative and shows their intelligence. When an octopus loses an arm he can regrow a new one. 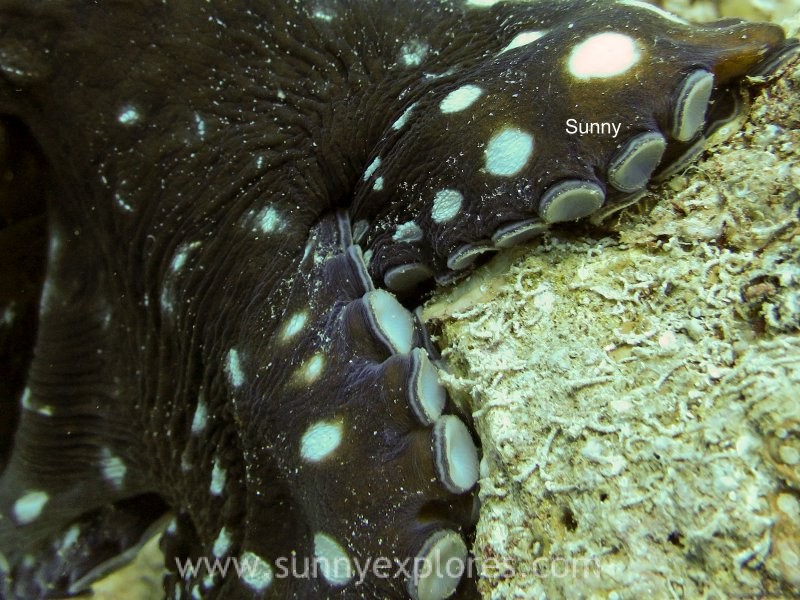 Octopuses are invertebrates, which means they have no backbone. In fact they don’t have any bones at all, which makes them extremely flexible. They fit into the smallest cracks and squeeze through tiny openings. This helps them to stay safe for most predators, but it also makes them difficult to spot for divers. 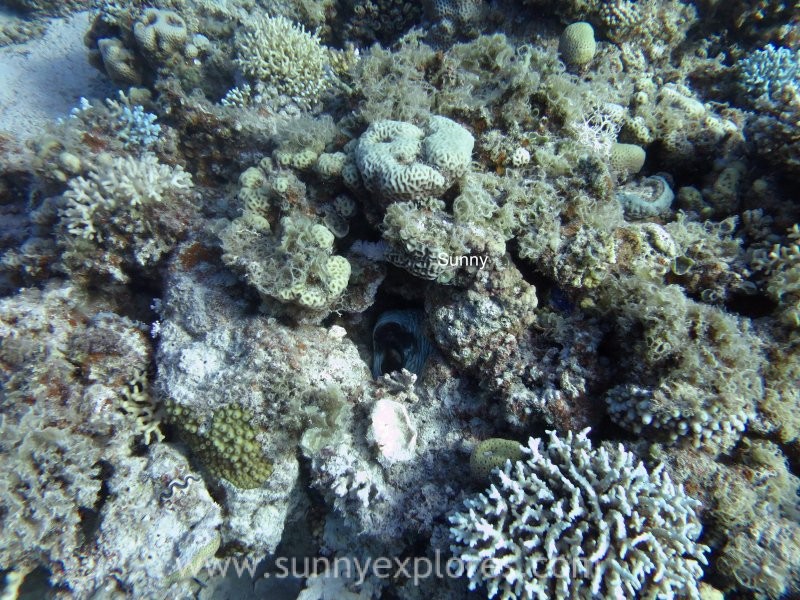 Another strange fact: an octopus has three hearts. One pumps blood through the organs; the two others pump blood through the gills. When he is swimming, the heart that delivers blood to the organs stops beating which exhausts the octopus. This is probably why they prefer to crawl than to swim. Octopus blood is blue instead of red, because it has a copper-based protein called hemocyanin. Even the octopus mouth is special: it has two beaks on the outside of the radula, the part of the mouth that can open shells. 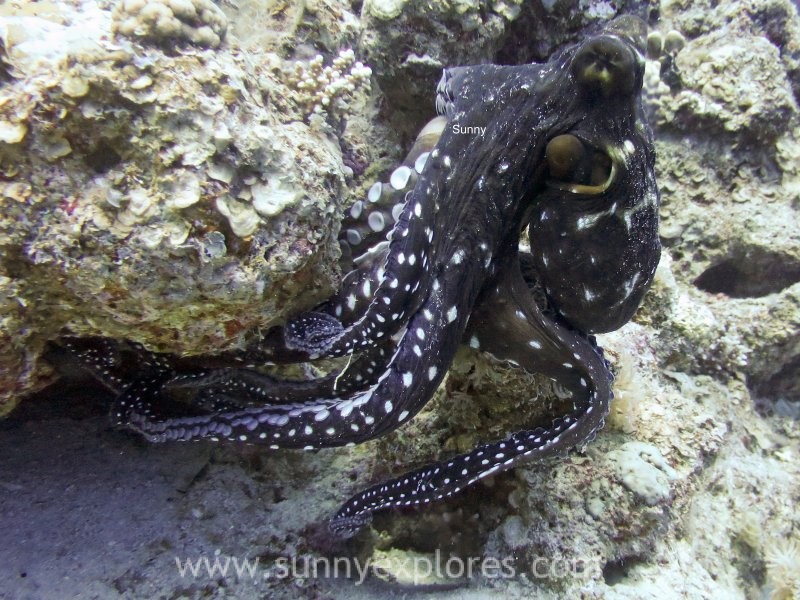 What I like most about octopuses is that they collect treasures. They collect things to use as tools, but they also create nice homes for themselves with all kind of ornaments like shells and seaweed. Sometimes they even built a fortress in order to camouflage and protect themselves. And that is a special feature too: the ability to camouflage himself. An octopus can change color to hide and match his surroundings. And the amazing thing is that the octopus not only can change his color and pattern, he is also capable of changing his skin texture in order to imitate his background. But the octopus goes even further: he uses mimicry. Mimicry works a bit differently from camouflage in that it allows the octopus to mimic the shape of other ocean animals in order to trick potential predators or prey into thinking it is a different animal species.When camouflage doesn’t work an octopus may release a jet of dark ink in the direction of his predator. This ink blinds the enemy and dulls the attackers sense of smell and tast so it’s almost impossible to locate to fleeing octopus. Besides this technique the octopus also has a poison that allows him to weaken and immobilize their prey or predator. Only the blue ringed octopis has a poison that is dangerous to humans. 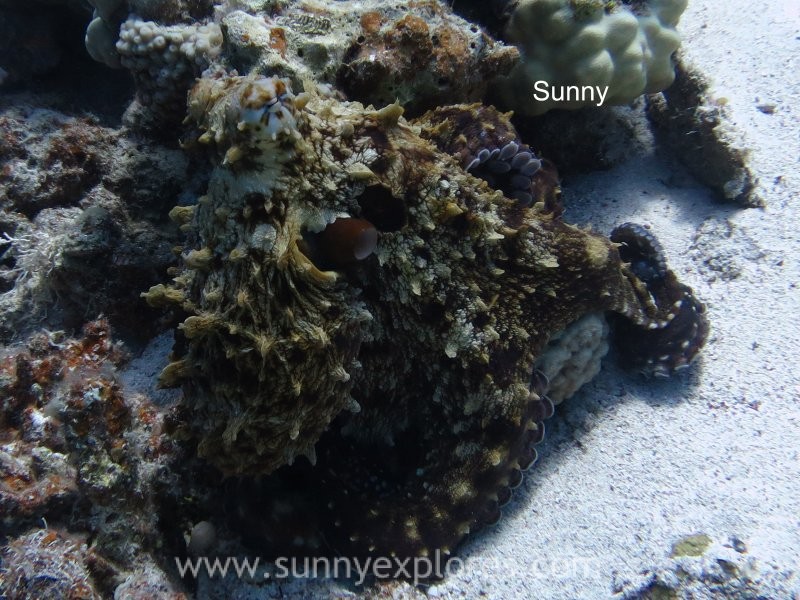 Octopuses are solitary creatures. They live and hunt alone. Male and female octopuses mate with different partners. But mating is dangerous; when octopuses mate, they die soon after. During reproduction, a male delivers sperm by inserting a specialized arm, usually the third right arm, into the female’s mantle cavity. The female lays thousands of eggs and she guards them with her life. She doesn’t even take time to eat or sleep, so she exhausts herself. The male and female die shortly after the eggs have hatched. So the baby octopuses are on their own in the big wide ocean and learn very little from their parents. My hunderth dive in Dahab in Egypt was in the stunning site Um Sidd and I finally had the chance to take my octopus picture. It became even better: during 18 dives in one week in 16 different dive sites I saw no less than eight octopuses. My best octopus week ever! It made me so happy to have the privilege to spend time with this amazing creature, to study his behavior and to enjoy his capriols. Each octopus has its own personality and character traits and I believe, even a sense of humor. 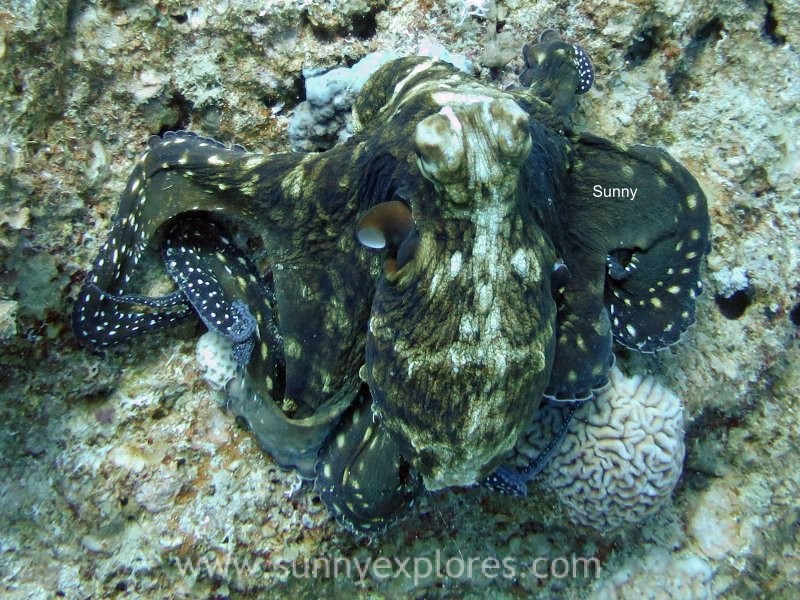 2 thoughts on “Under water adventures: diving with octopuses”