What to see and do in Rotterdam in the Netherlands 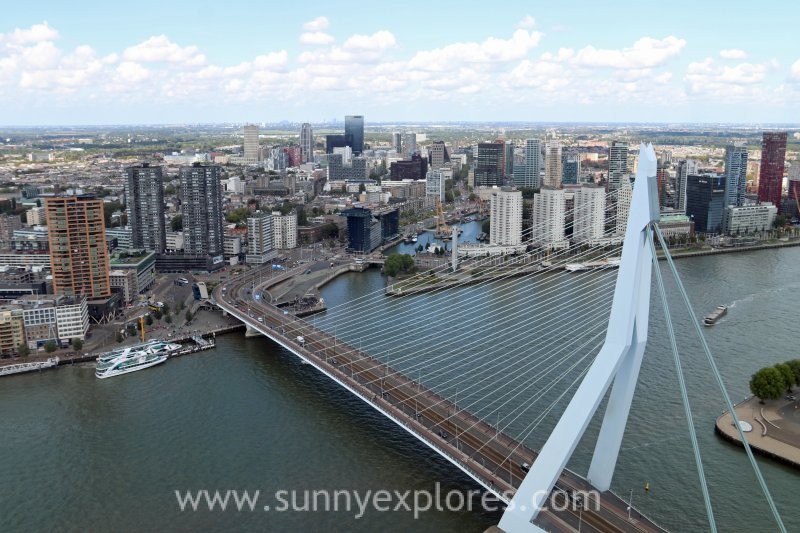 The city of Amsterdam is a populair destination in the Netherlands. The city literally bursts out of its seams with tourists. The Netherlands try to spread tourism across the country, by showing that cities such as Utrecht, Alkmaar and Rotterdam are also worth a visit. Rotterdam can be an eye-opener, especially for those interested in architecture.

Rotterdam is a port city in the west of the Netherlands. The city is located on the Nieuwe Maas, one of the rivers in the Dutch delta. The port of Rotterdam is the largest and most important in Europe. The name Rotterdam dates back to the 13th century when a dam was built in the river Rotte. The historic city was destroyed in May 1940 during the Second World War by German bombing. Rotterdam was rebuilt and is now known for its innovative architecture. I’ve been to Rotterdam several times, but I never really explored the city, so a friend from Rotterdam guided me through her city And here are my must-sees: 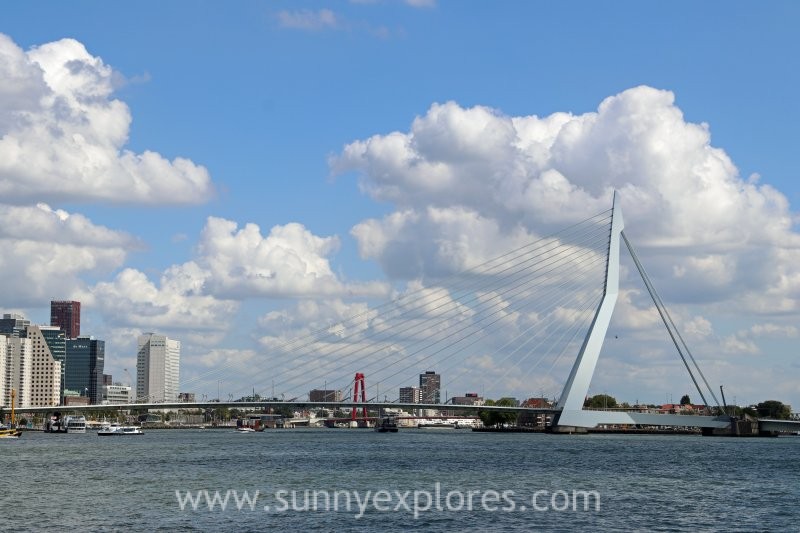 Maritime Museum and the Leuvenhaven 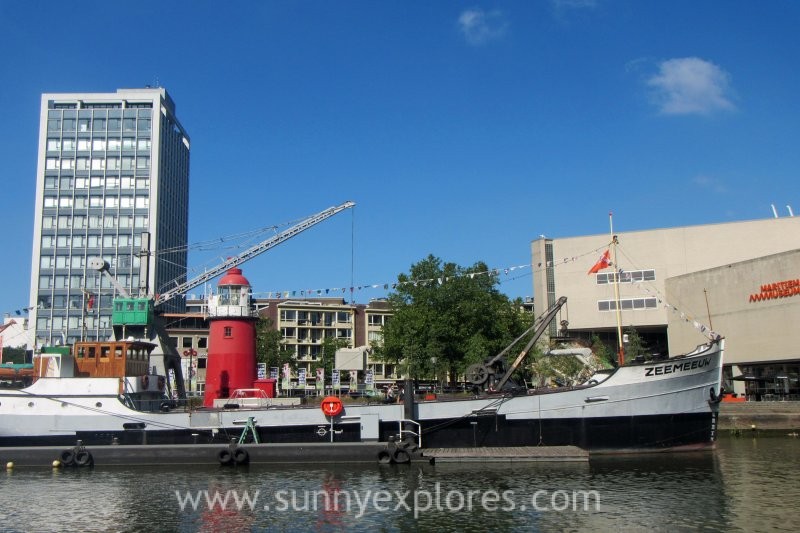 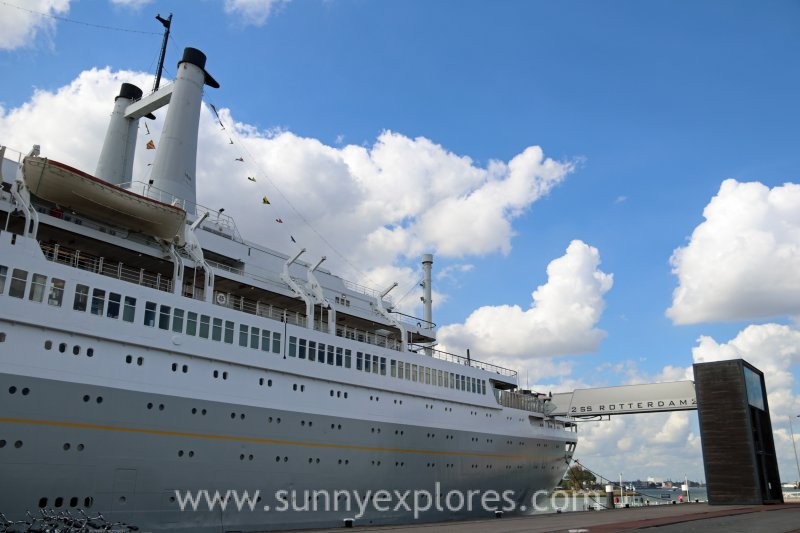 The steamship Rotterdam is the largest ocean liner ever built in the Netherlands. As a former flagship of the Holland-America Line and cruise ship, SS Rotterdam has sailed many oceans since 1959. Now the ship is permanently moored in the Maashaven in Rotterdam, near Katendrecht. Walking on deck makes you dream of far away places. 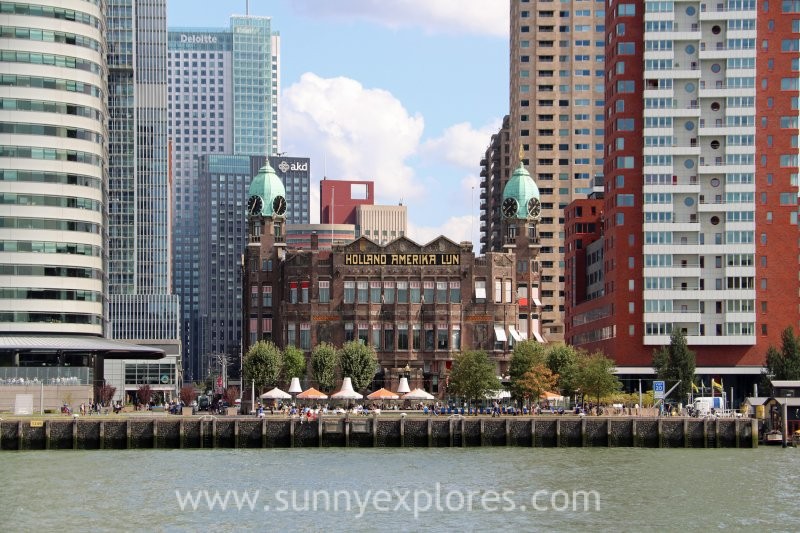 Hotel New York opened its doors in 1993 in the former head office of the Holland America Line, on the banks of the Nieuwe Maas. The characteristic building from 1917 breathes the past and symbolizes the departure of the many emigrants who left their country to chase a new life with hope and excitement. 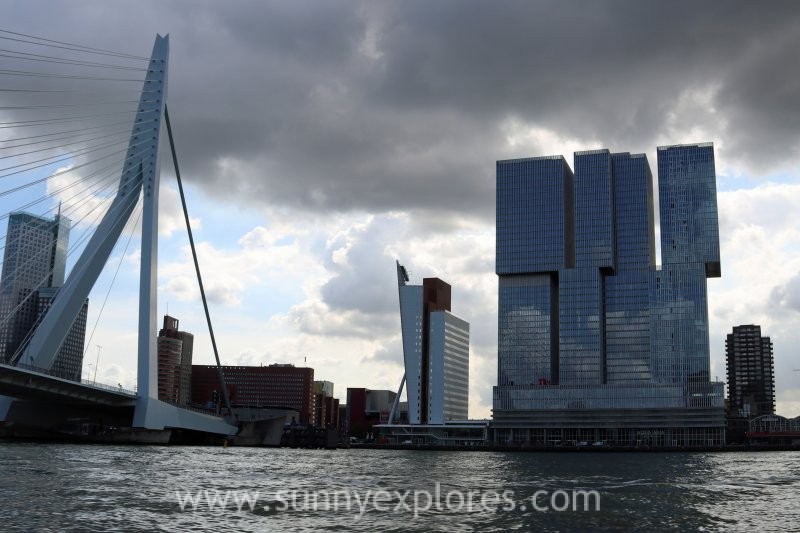 De Rotterdam is an icon in the field of architecture. Three connected towers of almost 150 meters form a ‘vertical city’ with luxury apartments, a four-star hotel, offices, shops, catering, fitness and parking. The name refers to the steamship SS Rotterdam, which used to combine many functions too, for the comfort of travelers. The view from the 40th floor is amazing! 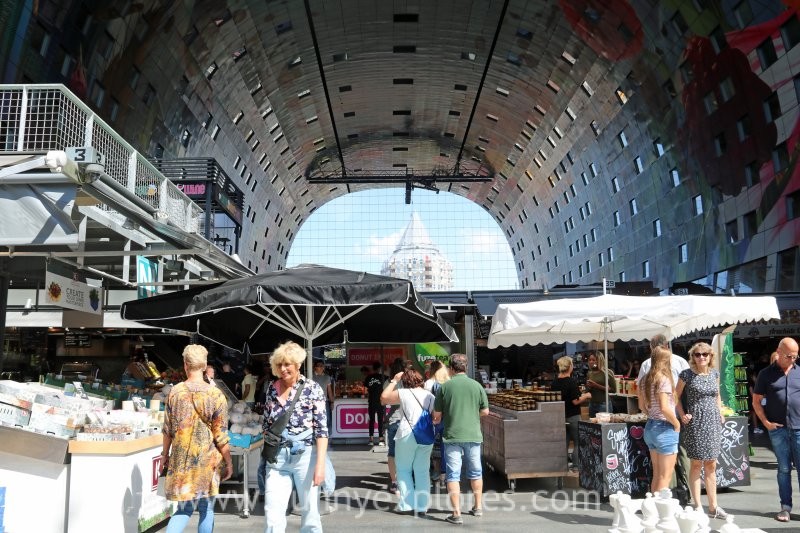 The Markthal combines the function of market hall with a residental function. The apartments are above the fresh market in horseshoe shape. The market is located in the hall itself. When you walk through the market stalls and look up, you will see the artwork ‘Horn of plenty’ by Arno Coenen and Iris Roskamm, it’s the largest piece of art in the Netherlands. Don’t forget to go down in the parking basement. Here you will find an archaeological presentation about the history of Rotterdam. 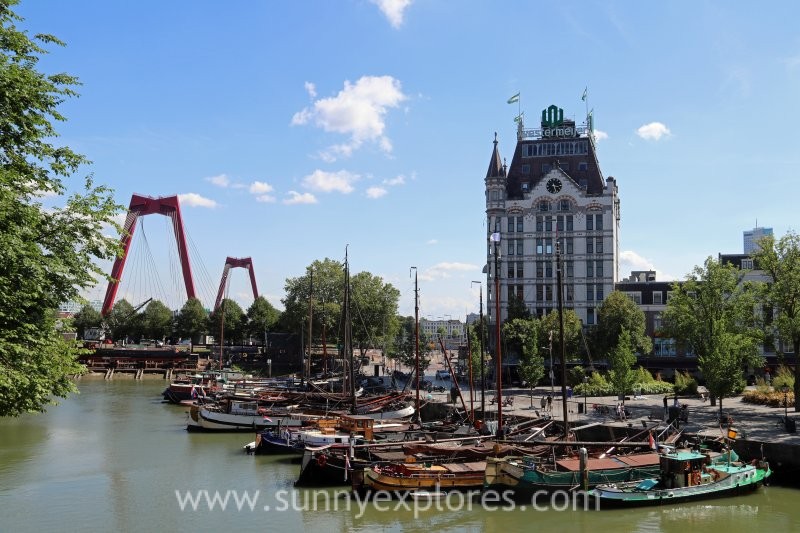 Rotterdam is inextricably linked to the Meuse as a port city. It’s interesting to visit the busy port, but it’s more intriguing to walk through the Old Harbour, de Oudehaven, one of the oldest ports in Rotterdam. Now it is a lively area, with a beautiful view on the Cube Houses. Yet you still feel that it is an old harbour. Don’t be surprised when you see a ship in a dry dock, just in the middle of the city. The Oudehaven is connected to the Wijnhaven on the west side and the Haringvliet on the east side. 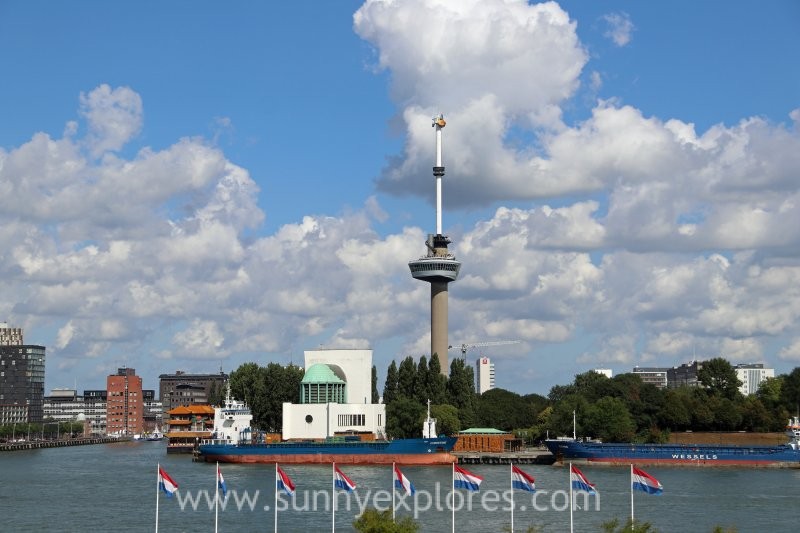 The Euromast is the tallest building in Rotterdam. At a height of 100 meters you will find a viewing platform and a brasserie. With a lift you are uptill 100 meters in 30 seconds. With the Euroscoop you can even go to 185 meters. The mast was designed in 1960 on the occasion of the Floriade. The Euromast was then 100 meters high. In 1970 the tower was expanded with a Space Tower and became the highest observation tower in the Netherlands. 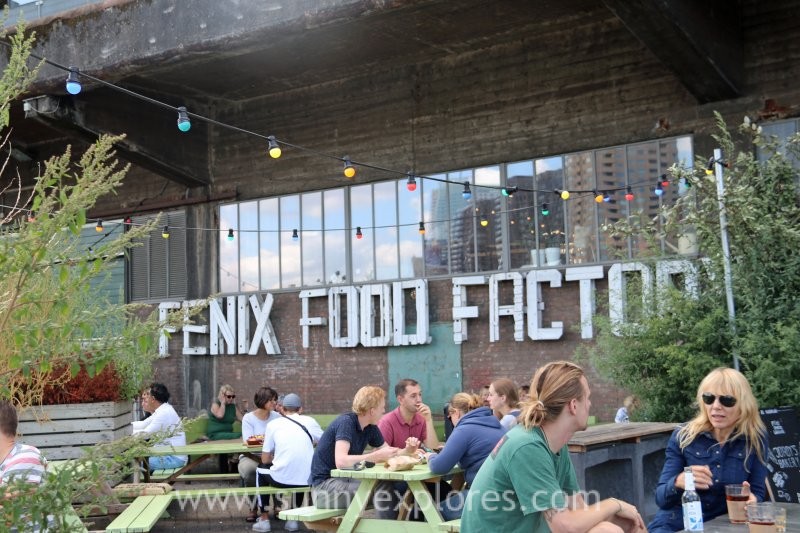 An old harbour shed on Katendrecht was turned into a culinary breeding ground. Entrepreneurs from Rotterdam united under the name Fenix Food Factory and created a place where you can go grocery shopping, gain more knowledge about traditional products and of course enjoy a good meal. 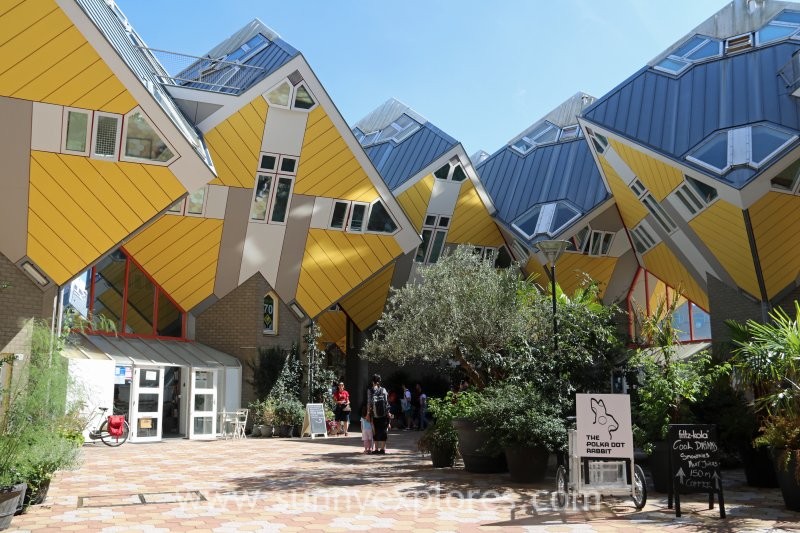 The Cube House, also called pole or tree house, is a design by architect Piet Blom. He wanted to design a village in the big city, with houses as trees and the whole complex as a forest. The cubes are tilted, so that three sides are directed to the ground and three to the sky. 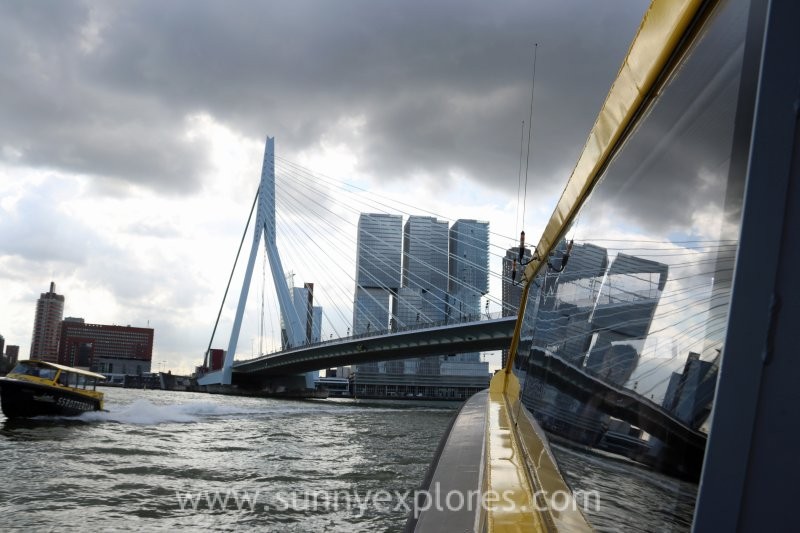 The best way to see Rotterdam is to take a watertaxi every now and then. The whole city is closely connected to water and the port. It breaths a maritime atmosphere that is best felt during a ride on the river. 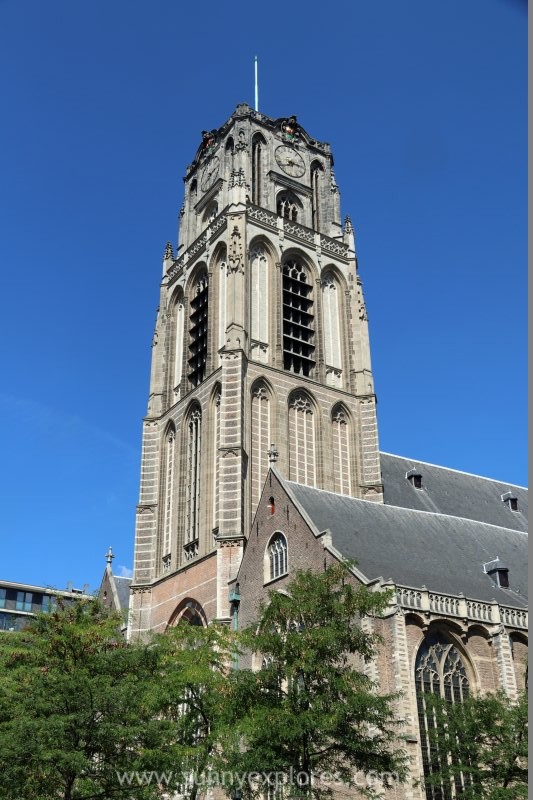 The Laurens Church was built between 1449 and 1525 along the river Rotte that formed the cradle of Rotterdam. It’s the only remaining late Gothic building from the originally medieval town. The images of the badly affected church in the Second World War and its reconstruction afterwards became a symbol of the fortunes of the city and its inhabitants. 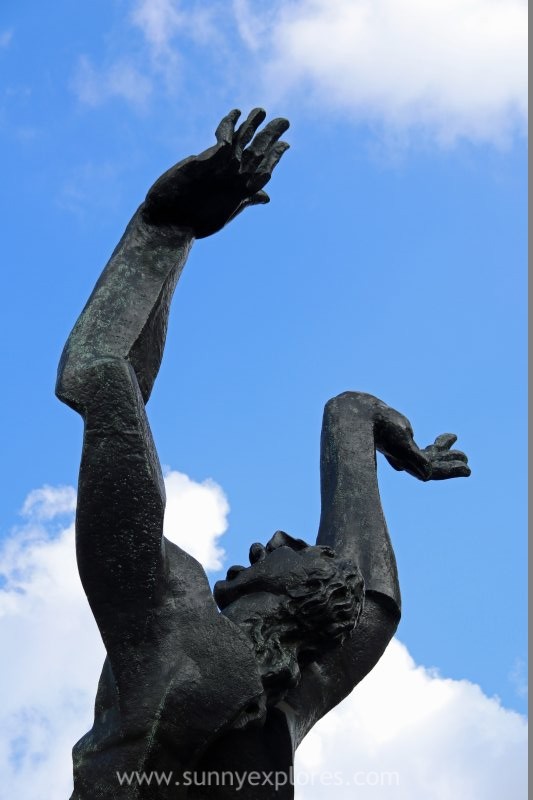 ‘The destroyed city’, created by Ossip Zadkine, represents the bombing of Rotterdam during the Second World War. It is located at the Leuvenhaven, next to the Maritime Museum. The bronze statue represents a man without a heart, symbol of the heart of Rotterdam that was lost during the bombing. 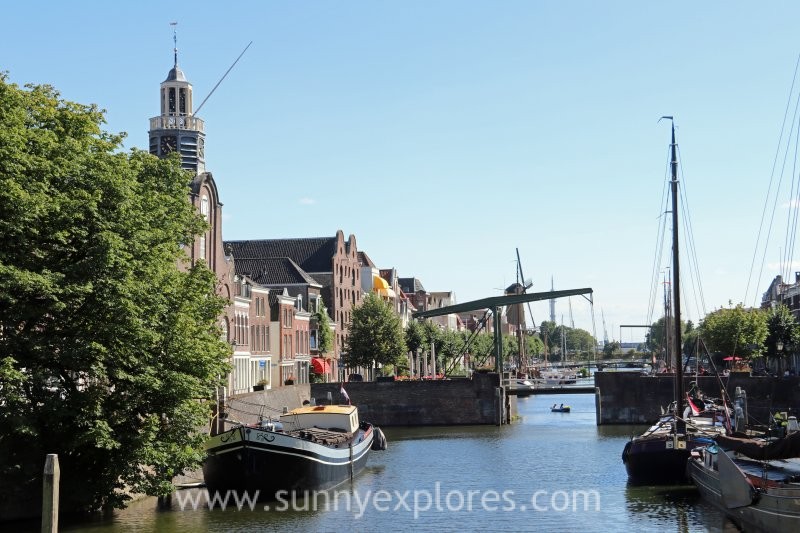 This picturesque marina is one of the few parts of old city that survived the bombing of Rotterdam in 1940. This is the place where the Pilgrim Fathers left for America and where sea hero Piet Hein was born. In the past, everything revolved around herring fishing and the distillation of gin. Now you can find antique shops, cafes and restaurants in the historic canal houses.

These are the sights we explored in one day. When you have more time in Rotterdam, the city will reveal more treasures to you. And the beaches from Hoek van Holland are close! So take a few days to explore Rotterdam and its surroundings.