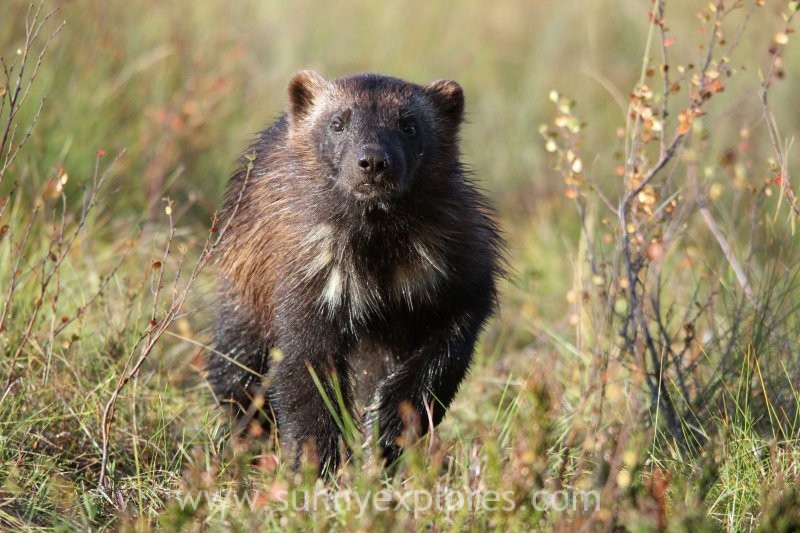 Mid september I was in Finland hoping to photograph brown bears in their natural habitat. I never expected to encounter wolverines too. The first time I saw a wolverine emerge from the forest at last light, I actually didn’t know what I saw. When the animal approached I realized it was the elusive wolverine. Their population in Finland is estimated around 150 till 200 animals and they have large territories, yet I was so lucky to encounter 3 different individuals, even 2 at the same time. As always when I discover something new, I dive into it. So I researched these fascinating animals, who are a vital part of ecosystems in northern climes, such as the Finnish taiga. 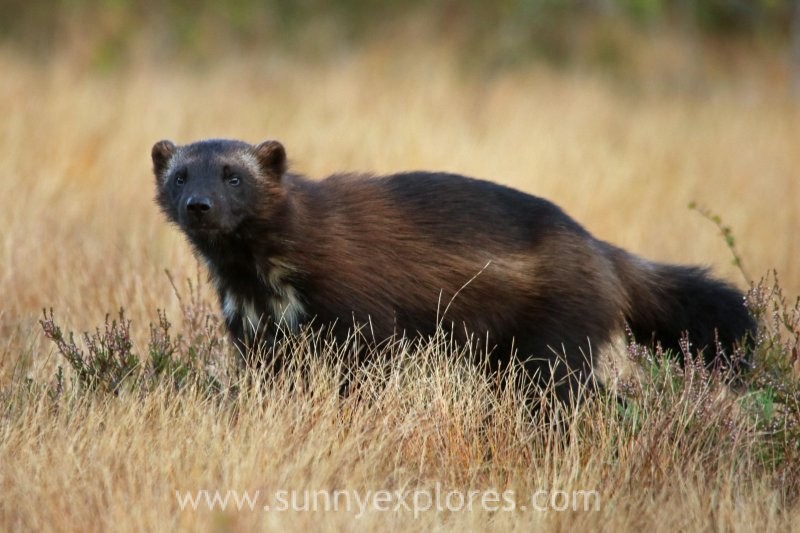 The wolverine, the gulo gulo, is the largest land-dwelling species of the weasel family. The wolverine’s Latin and Finnish names are derived from its feeding habits: ‘gulo’ and ‘ahma’ both mean ‘glutton’. When a wolverine finds something to eat, it devours it quickly, swallowing even the larger chunks of meat as a whole. An adult wolverine is about the size of a medium dog, with a length usually ranging from 65 till 87 centimeters and a weight of 10 till 30 kilograms. Males are quite larger than females. Wolverines give off a strong, unpleasant odor, giving them the nickname ‘skunk bear’. 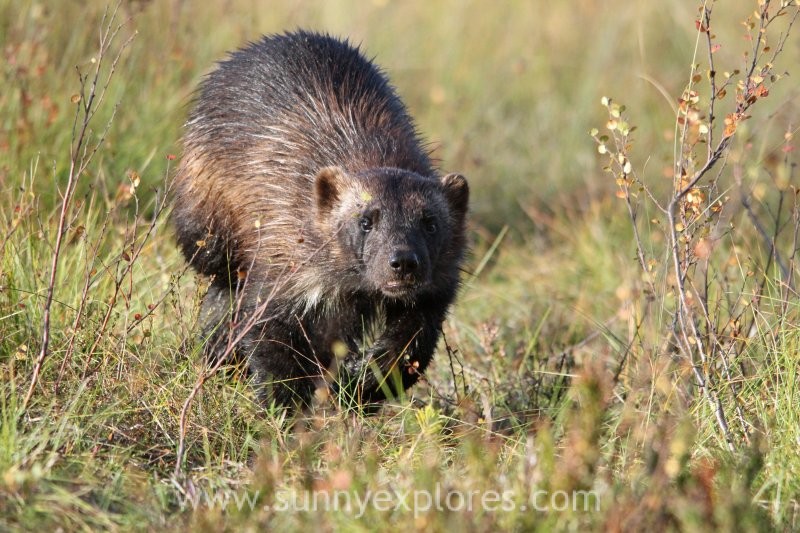 Wolverines, as other mustelids, have a special upper molar in the back of the mouth that is rotated 90 degrees. This special characteristic allows them to tear off meat from prey or carrion, and also to crush bones which enables them to extract marrow. Males mark their territories with their scent, but they allow several female wolverines to live in their territory. Females den in the snow to give birth to two or three young each late winter or early spring. Young wolverines are called kits and they live with their mother until they are about two years old. In the autumn you might see a young wolverine learn to forage independently from his parents. And this is excatly what I saw one night on the Finnish taiga, a slim, small wolverine skittish looking for food. 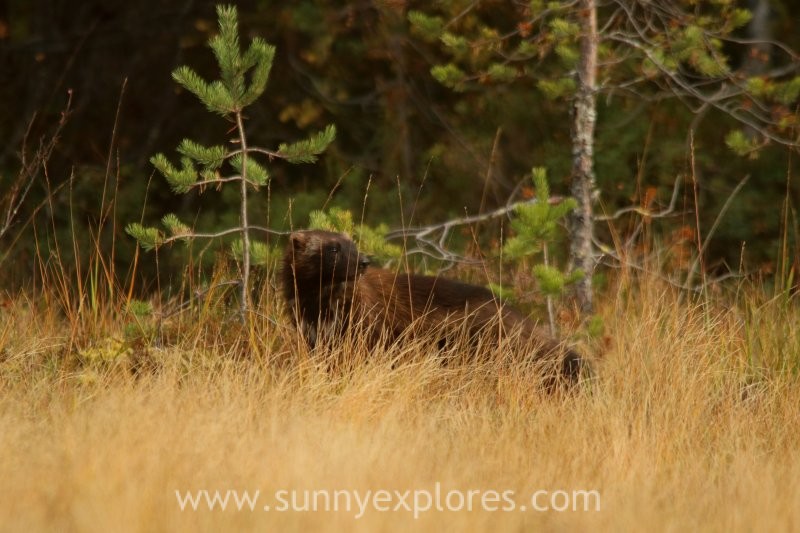 As wolverines are scavengers, the majority of their meals are made up of carrion. Most of the time they find their carrion, but sometimes they rob a predator or try to take down a deer. More normal catches include rabbits, mice, voles, gophers, marmots, beavers, chipmunks, porcupines and squirrels. When there is a lot of food available, the wolverine will store some in a cache to have a supply of food during winter, when food is scarce and lactating females need it the most. Mating season for wolverines is during the summer but the implantation of the embryo in the uterus does not take place until early winter. If food is scarce, a female wolverine will not produce any young. Litters of two or three kits follow a 30 to 50 day gestation period and the kits grow quickly reaching adult size in a year. The fathers will visit their offspring until they have been weaned, at about 10 weeks of age. Once the kits are about six months old, they will reconnect with their fathers and travel together for a period of time to learn hunting skills. In the wild a wolverine will live only to about 10 years. 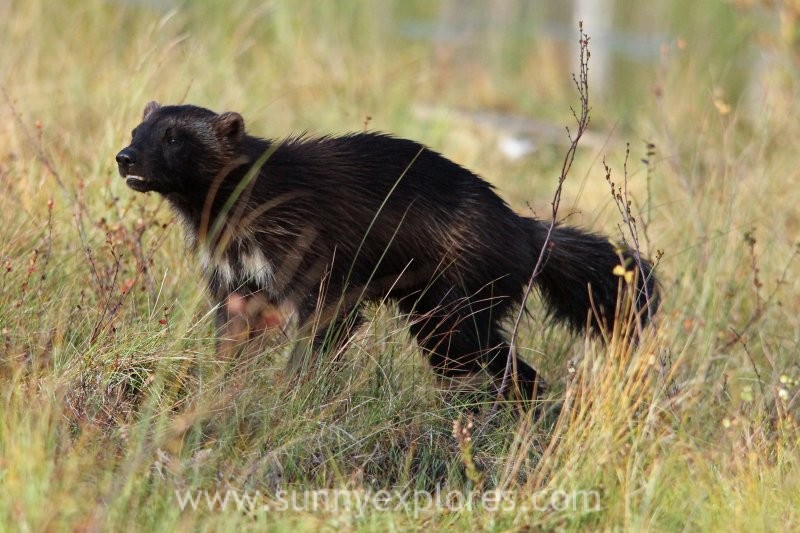 Meeting wolverines in their natural habitat was a special experience for me. Knowing there are only around 200 individuals in Finland makes me feel so privileged to encounter this fascinating animal with its intense gaze. 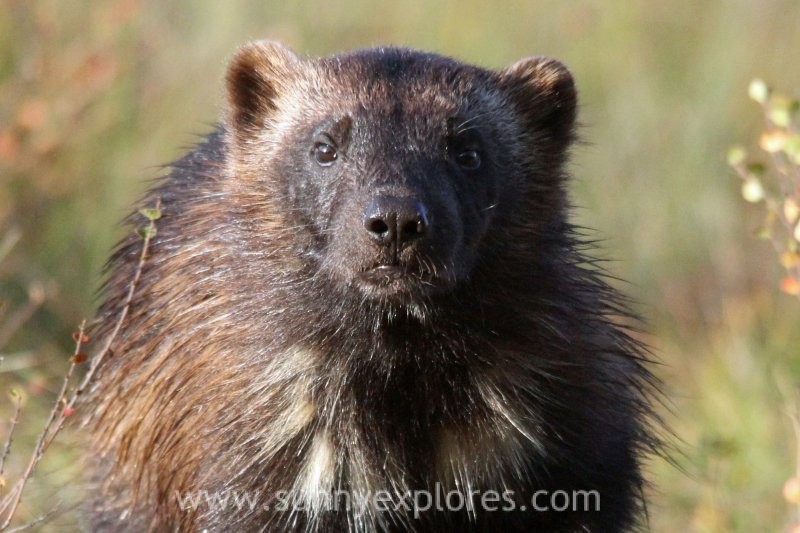